March 05, 2014  •  Leave a Comment
WIN TWO TICKETS (VALUED AT $180) TO CURE ME I'M IRISH 2014!!  Leave a comment below to be entered to win.  Winner will be randomly drawn on Thursday night and notified via email and Facebook.  Here's what Beat NB says about this year's event:
Cure Me I’m Irish 2014 Kicks off on Saturday night and we have our most exciting lineup yet! The 7th annual event is going to be the most fun you’ve had while celebrating St. Patrick’s day and the best part is you get to save KIDS with cancer while doing so.
Saturday March 8th 2014 starting at 8pm at Lombardo’s in Randolph Massachusetts
Tickets can be purchased online or at Hilaire’s Salonat 60 Pearl Street in Braintree Massachusetts.
Your ticket to the event includes admission, food, complimentary beer & wine, entertainment beer tastings. That is an incredible deal – and while you are there you’ll have the chance to bid on some great silent auction items and raffles. Let’s break it all down and remember this is ALL INCLUDED with your ticket:
The Food
Hand passed items:  Scallops Wrapped in Bacon w/ Stout Mustard –  Chicken & Lemongrass Pot Stickers w/ Sweet Chili Sauce - Mini Veggie & Pepper Jack Quesadilla
Stationary food items: Artisan Gourmet Cheese Display - Mini “CHOPPED” Veggie salad in 8 oz cups - ¼ Reuben on Marble Rye w/ house fried Chips in a Red basket - Cocktail meatballs 2 ways : Lombardo’s traditional Pomadoro sauce OR Sweet & Sour - Mini “Hoggies” w/ assorted cured meats & Cheese, Pickles & House Fried Chips (served off of HUGE butcher blocks) - Trio of Hummus & Pita Chips, Crustini - Buffalo Chicken Bites w/ Blue Cheese Dressing & Celery Sticks.
I have to say I am particularly excited about the food this year after sampling all the great food the new chef at Lombardo’s has to offer at last weeks Winterfest hosted by the South Shore Chamber of Commerce.
Drinks
Your ticket includes complimentary beer & wine from all of the bars as well as water or soda.  This is in addition to the beer samples available from our brewery partners who’ll have a beer tasting section allowing you to sample their wonderful products.
This year we have brought in three new local breweries that have never before been at Cure Me I’m Irish – all of whom have extraordinary offerings.   Beer Works – Newburyport Brewingare both out of Massachusetts and Foolproof Brewing which is representing the great state of Rhode Island.
Entertainment
You asked for it – so we listened – this year we’ll have a live band going from the second you get in the door until the end of the night when your feet can not stand anymore dancing.  A mix of lively and fun music to get you out on the dance floor from the 60′s through today’s Top 40 it is what you asked for and it is what we are delivering to you with Downtown Fever.
We will once again have some pipe & drums to greet you at the door and to kick off the night in style.
So you get ALL of that – food, entertainment, beer tastings and complimentary beer  wine with your ticket – that is the deal of a lifetime because while you have a great time we’ll be using your funds to save KIDS with cancer.
What else is available besides all that great stuff that is included with my ticket?  We’ll I’m glad you asked.
This year we will have raffle items, auction items, T-shirts for sale as well as the world famous Cure Me I’m Irish Plinko board!  Support these items with your pocketbook if you’d like to help us make some additional money to save KIDS with cancer.  Also, please note that you will have a chance to win two free tickets to Cure Me 2015 by tagging any photos you take with #cureme on Facebook/Twitter/Instagram.  We’ll pick a winner from each platform for next years event.
The Penalty Box
This year we are introducing you to a new part of Cure Me I’m Irish called “The Penalty Box”.  From the craftsman that brought you the Plinko board in 2013 this year he has built a legitimate penalty box!  There is plexiglass, a door and of course a bench to sit on and a cup holder for your drink!  This is how it works: you purchase a “Penalty Box Sticker” and you give it to the person that you’d like to stick in the box and they go in for a 30 second penalty!  After being freed from the sin bin they can wear their sticker with pride showing how the went into the box to help out a great cause.
A dear friend of ours was diagnosed with brain cancer back in June and in November she was taken form her husband and her two children.  ”Okie” grew up in Braintree and after meeting her husband they moved to Canton to raise their children in a loving and supportive neighborhood.  Sadly just two months later her husband died leaving their two young children orphaned.  The Furbush Children’s fund was set up to help educate the kids after Okie died but has taken on new urgency and meaning after both parents have died.  There is no way to make sense of such a tragedy but the friends and family of these children are hosting a fundraising event to support these kids on June 7th at the Teacher’s Union Hall in Boston – be sure and save the date.  In order to try and help this year we will be donating all the proceeds from the Penalty Box to help support the Furbush Children and honor our friend Kristen.
The VIP Session

A new twist this year – we have gone ahead and added a VIP session to Cure Me I’m Irish that runs from 6:15pm until the event kicks off at 8pm.  This event is held in the downstairs function room and is free for NB parents and includes event sponsors, Beat NB board members as well as presentations.  This year Dr. Sholler will be proving an update to our guests about how our work has helped the NMTRC achieve it’s mission of impacting survival and how your support is literally making a difference today.  We are also honored to have the reigning Miss Rhode Island in attendance who is currently a college student and who just happens to be a neuroblastoma survivor.  And last but certainly not least is our very special guest from North Carolina – Ashley – who just last month was declared 18 months clear of neuroblastoma and has spent all of that time on the DFMO study that YOUR support has helped make happen.  It is going to be an extraordinary start to the evening and something you can be a part of as an event sponsor or with the purchase of a special VIP ticket that also includes your normal event admission. 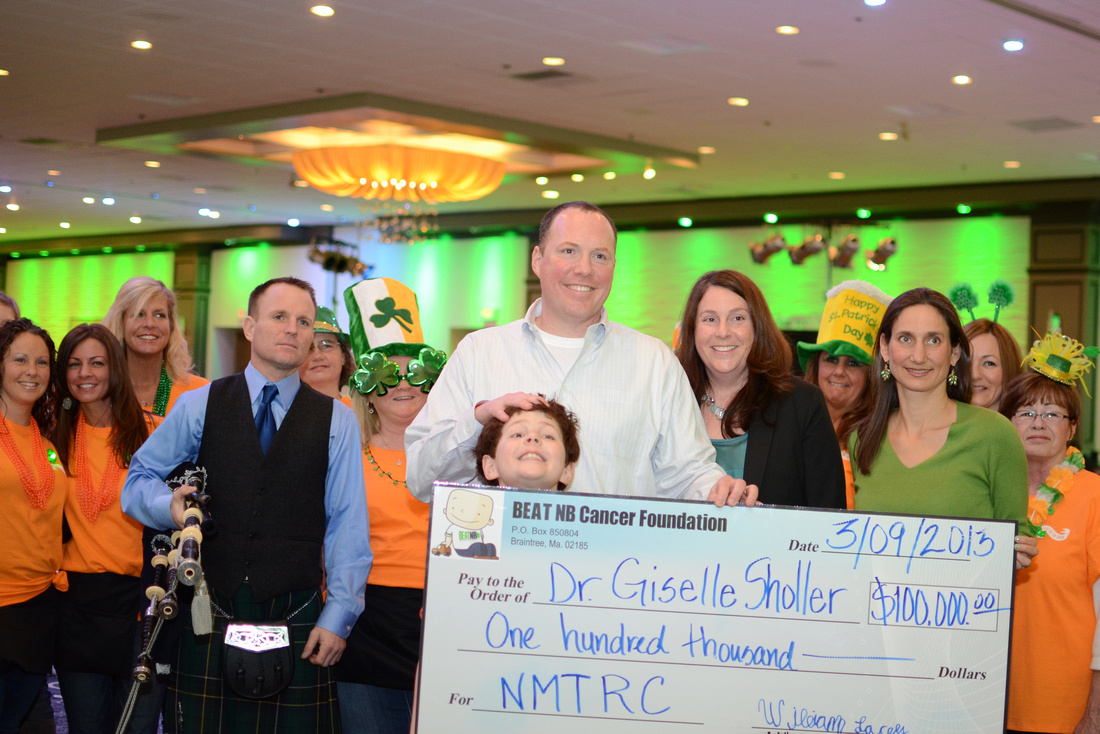